Apart from the Sun and the Moon, the planet Venus is the most respendent object in the heavens. Those who have seen it as Morning Star and Evening Star have seldom failed to be impressed by its brilliance. From the corpus of legend surrounding it, we know that it also impressed peoples of the ancient world. The attributes they assigned the planet in the guise of patron gods and goddesses range from the beautiful to the baleful.

What did the ancients know about the planet from a scientific point of view? How accurately did their capabilities allow them to monitor its apparent or synodic cycles? Through research and reconstruction, the present writer discovered that the ancients devised an ingenious formula and a set of related symbols with which they expressed the planet's average synodical revolution of 583.92 days as 584 days.

Before focusing our attention on their Venus formula, it should be noted that the ancients derived it from an older cosmic direction-number plan. This venerable plan, a circular quaternion or tetraktys scheme called "World" by Pythagoras, was composed of the numbers 1 to 8. These numbers were placed in opposition around a circle so as to yield four sums of 9. Considering the Center as 0, the entire direction-number scheme was conceived as North-1, Northeast-2, East-3, Southeast-4, Center-0, Northwest-5, West-6, Southwest-7, South-8.

This scheme was very important to the expression of certain formulas and symbols relating to Earth's annual cycle. It was still more important to the expression of the synodic cycle of Venus. The formula with which the planet's average synodical revolution of 584 days was expressed consisted of a greater portion adding to 504 and a lesser portion adding to 80. The greater portion was derived by multiplying the numbers associated with North, East, Southeast, West, and Southwest (1 x 3 x 4 x 6 x 7 = 504). The lesser portion of the formula was derived by multiplying the numbers associated with Northeast, Northwest, and South (2 x 5 x 8 = 80). Seen in its entirety, the Venus formula would normally have appeared within a circle, the three-pointed "spearhead" figure of the lesser portion emanating from behind the five-pointed "star" figure of the greater portion: 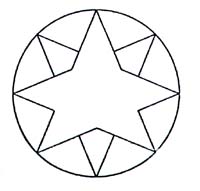 Both the Egyptian hieroglyph ( ~ ) for "star" and the Chinese character (~) for "great" appear to have been taken directly from the original five-pointed "star" figure denoting the greater portion. Evidence from other cultures indicates that their symbols for "star" and "great" were also expressed by one or another graphic representation of the formula's 504 portion. Such representations, be they found by themselves or among the iconographic repertoire of various Old World and New World deities, are largely five-pointed stars and squat-walled pentagons or tetragons. Squat-walled tetragons, resulting from the omission of North and its associated number, expressed an alternate version of the greater portion (3 x 4 x 6 x 7 = 504):

Due to the fact that representations of five-pointed stars abound in the surviving art of early cultures, little needs to be said as to their specific whereabouts. Surviving examples of squat-walled pentagons, however, present us with numerous difficulties. Chief among the difficulties is the fact that examples of tectiforms with distinctly similar outlines have been located amid the drawings of European cave-artists. Do the cave-artists' tectiforms relate in any way to the Venus formula's pentagonal symbol? While they would appear to, we cannot be at all sure that what we have is other than a coincidence of form.

Representations of squat-walled tetraons also involve possible coincidences of form, especially the short tetragonal skirts or kilts worn by various deities. Such apparel, when worn by deities with known fertility or warrior roles, may constitute something of a "star" context. The most demonstrable cases, however, are those in which the tetragonal forms are massive "blocks" set betwixt outspread legs, the narrow end facing the feet and wide end facing the waist. Two such depictions, almost as close in context as distant in location, provide us with powerful evidence regarding the transmission of Venus formula symbols from the oid World to the New World. The first depiction is a "shameless goddess" from a cave at Siddan Kotte in Northern Karnatak, Mysore, India. The second is a "diving god" from the stone of Tepetzintla at Tuxpan, Veracruz, Central America: 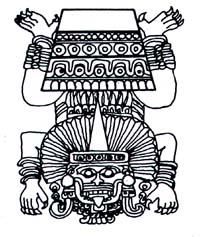 The Venus formula numbers were not always affixed to a circle. They were frequently housed in a nine-celled square. This square, an ancestral model for the famed "magic square of three" the Chinese called Lo Shu, provided the necessary foundation. for a Venus mask which fully expressed the original Venus formula. The three cells that housed the lesser portion numbers were replaced by three circles of the same dimension, yielding the mask's two eyes and mouth. The five cells that housed the greater portion numbers were replaced by five circles turned inside out by quarter sections, yielding five "tears" shaped like diamonds. The procedure outlined above should make clear to the reader the method by which the mask was originally created: 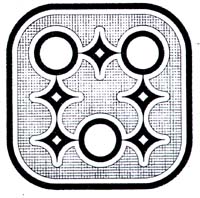 The ancients created another mask by incorporating a later Venus symbol composed of seven teeth. The "dentata" figure of seven teeth, explained elsewhere in this article, was inserted into the mouth area of the face with tears as illustrated below. Note that while changes made in the face were few, they were indeed dramatic. The resulting mask was clearly intended to be malevolent in appearance. Judging from Venus motifs in art and literature, many cultures throughout the world seem to have viewed it as some sort of feline deity: 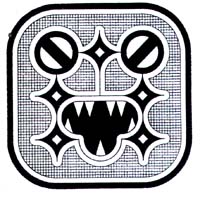 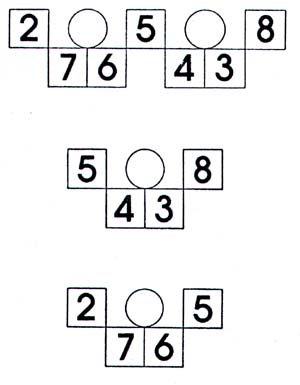 Bearing these reciprocal relationships in mind, plus the fact that Morning Star was associated with the Sun and Evening Star with the Moon, we can easily appreciate why cultures such as the Maya came to view the period of 20 days as particularly appropriate to a Sun-Venus-Moon trinity. Clear documentation of the foregoing is provided in that one of the. Maya glyphs (see image below) associated with Venus is virtually identical to the first standard Venus symbol to have been graphically derived from the seven-celled "W" form. While it would appear that the Maya lost touch with various aspects of the symbol itself, they did manage to maintain the principal time periods related to its numbers. For no one disputes the fact that the Maya viewed the synodical revolution of Venus as 584 days and the "month" as 20 days:

Another method for expressing the seven-celled Venus formula involved horizontal lines placed above and below the seven numbers. Four "dentata" projections extended downward from the upper line like stalactities; these pointed to the greater portion numbers. Three "dentata" projections extended upward from the lower line like stalagmites; these pointed to the lesser portion numbers. The resulting "dentata" figure was considered a figure indeed by the ancients. Unlike the preceding symbol (where applied connotations and colors differed from culture to culture), there was wide-spread agreement among the ancients that this figure was a woman lying on her back with legs akimbo:

Depictions of similarly postured female deities have been found in many regions of the world. Some can definitely be said to relate to either the "dentata" female figure or to its "smooth" curvilinear counterpart illustrated below. Allusions to both figures have been repeatedly encountered throughout the world's literature and the "vagina dentata" motif itself clearly indicates that the "dentata" female dispatched her lovers until she was rendered "smooth" by a hero's grinding stone:

With the presentation of this last figure, we have come to that point in time at which Man viewed the planet Venus as the Goddess of Love and Childbirth. It is clear from the sequence of symbols outlined above that Man's designation of the planet as being female was not the result of some idle whim. He worked with extreme dedication to create a number of designs capable of diffusion on a vast scale. Due to his efforts to symbolize a scientific achievement of considerable magnitude, it can now be affirmed that the synodical revolution of the planet Venus was determined thousands of years before Christ.