The following is a small section in Lucy Lippard's OVERLAY.
(C) 1983 by Lucy R. Lippard. All rights reserved. Published in the United States by The New Press. New York 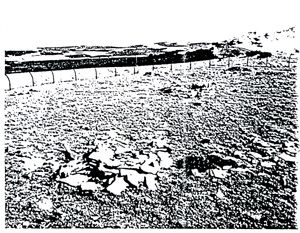 Medicine wheel, Big Horn Mountains, Wyoming. c. 1500-1765 AD. 80' across, 245' circumference. Built by prehistoric Native Americans (restored by forest rangers in 1931-55), it may represent the sun, though its 28 spokes suggest lunar months. Its six cairns might stand for the planets; they are aligned to sunrise and sunset on the summer solstice and to the rising points of the stars Aldebaran, Rigel, and Sirius. The wheel may have signaled the proper day to begin the Sun Dance. The spokes of the Big Horn Wheel, like those of other medicine wheels on the Plains, nearly always point to other, distant wheels and cairns. Artifacts found at the Majorville Wheel in Alberta, Canada, establish its construction up to 5,000 years ago, while the Egyptian pyramids were under construction.

One of the most ancient lunar images, dating from 6500 b.c., is the stone Venus of Laussel--a wide-hipped nude woman holding a crescent-shaped bison horn with 13 notches, corresponding to the lunar months. The Pythagorean "complete" numbers (such as 7, 9, 12, and 28) reoccur throughout the old cosmologies, equated with the planets the zodiac, and the lunar mansions. Bart Jordan has found the lunar number 28 on the Venus of Laussel, and interprets it as outlining the moon's journey. He also notes that to the Sioux visionary Black Elk, the bison stood for 28 because it had 28 ribs. There are 28 feathers in the headdress and 28 poles in the lodge dedicated to the Sun Dance, representing the conjunction of the sacred numbers 4 and 7 and the number of the Sioux lunar months. The Big Horn Medicine Wheel has 28 spokes, and the number 28 recurs elsewhere in the most diverse societies. Its base, the number 7 is the "virgin" number because it is neither the product nor the factor of any other number; a mathematically perfect heptagon does not exist: "The geometry of seven is developed from no other system nor does it give birth to any." It is the product of 3 (representing odd numbers) and 4 (representing balance), so it unifies the contradictions. Seven appears rarely in physical nature but often in references to temporal cycles and spiritual forces. The horse, a lunar and Great Goddess attribute, was traditionally shod with 7 nails on each hoof, becoming the transmitter of earth to sky, and vice versa.

Jordan has reconstructed a hypothetical lunar "alphabet" which visually "turns" as the week does. His analysis of another prehistoric goddess--the ivory Venus of Lespugue--involves a dizzying array of references to finger language, geometry, musical tones, chord systems, note names. By fusing the forms of egg, mandala. and uterine frog in overlapping ovals within her sculptural silhouette, he makes the figure into a mathematically evolved symbol of the universal goddess. He has also read the masklike features of other "Venus" figures (which in turn resemble the goggle-eyed Celtic goddesses) as numerical representations of movements of the planet Venus through the heavens.

Jordan is a musician, and his cultural deciphering of Paleolithic symbol constructions is embedded in the notion of permutation (also the base of Sol LeWitt's art). He works from the networks between natural, astronomical, physiological, spectral, musical, numerical, and linguistic systems in prehistory. After setting up a 20-semitone harmony wheel based on the human hand, and taking clues from sources as diverse as Plutarch and ancient Chinese thought, Jordan asked himself what the solstice and equinox and the seasons had to do with music--"and that's when I began to realize there must be a system older than this." His conclusions have the elegance of the most modern mathematical formulas and they appear to apply to virtually every prehistoric culture.

Combining an intuitive sense of form with meticulous research, Jordan attempts to see with the eyes of the ancients. Of particular interest to visual artists is his work with color (traces of pigment are found in Neolithic pictographs in Valmonica, Italy, and of course in the caves) and with body counting, which he says always began with the left hand. (There are still places in the world where women count with the 28 finger-and-joint system.) Jordan then ties all this into the magic squares of 9, adding up to 15. (The magic square is still a popular mathematical game; Ad Reinhart used a nine-square grid armature for his black paintings.) These magic squares may relate to the enigmatic "checkerboards" or calendar grids found in many ancient rock carvings on all continents.

Ernst Cassirer has also pointed out that mythical time is always conceived "both as the time of natural processes and of the events of natural life." Thus the determinedly "simple" art of the Minimalists and Conceptualists can be related to basic survival, seen as a way of coping with the clutter of modern specialization and going back to learn for oneself how humankind learned--within "the terrible simplicity of the archaic frame." If one distrusts the value systems of this society, where does one look for alternatives? Back to the beginnings. Thus in much art about elementary systems there is a certain longing for precision that is simultaneously anti-technological and anti-romantic.

In "Sentences on Conceptual Art" (1969), Sol LeWitt stated a simple premise that helped to spark the synthesizing third stream of visual art: "Ideas alone can be works of art: they are in a chain of development that may eventually find some form. All ideas may not be made physical. . . . If words are used and they proceed from ideas about art, then they are art and not literature; numbers are not mathematics."